Let’s talk about two things that are known to help us sleep: melatonin and weed aka THC, CBD, Marijuana and Cannabis. How effective are they? Is one more effective than the other? Can you take them together? What will happen?

Weed or marijuana that is derived from Cannabis Sativa is a very strong sedative due to its higher THC content. However, its use is either illegal or requires a prescription in a lot of states. Though not quite as strong, melatonin is available over-the-counter and is safer since it’s a naturally occurring hormone in the body. You can also take weed and melatonin together as long as you can have a full night of sleep.

Having trouble sleeping due to jet lag? Nature Made Melatonin 3 mg Tablets is a product that I would recommend for it helps regulate the body’s biological clock and adjusting the sleep-wake cycles.  For a product that helps relieve pain and gives a feeling of relaxation for a night of better sleep, Hemp Oil Drops is what I recommend.

Available over the counter in most countries
Prohibited in most parts of the world
Mildly effective
Highly effective in general
Safe for long-term and short-term use
Safe for short-term use
Less side effects
More side effects
Not habit-forming
Highly likely, can be addictive and habit-forming
Tablets, lozenges, gummies, tinctures, etc.
Bongs, joints, vaporizers, edibles, etc
Check Price
Check Price
Melatonin

Available over the counter in most countries
Mildly effective
Safe for long-term and short-term use
Less side effects
Not habit-forming
Tablets, lozenges, gummies, tinctures, etc.
Check Price
Marijuana

Prohibited in most parts of the world
Highly effective in general
Safe for short-term use
More side effects
Highly likely, can be addictive and habit-forming
Bongs, joints, vaporizers, edibles, etc
Check Price 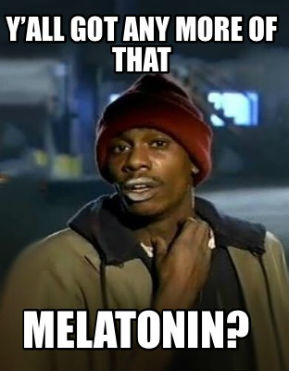 Melatonin is a hormone naturally found in the brain and mainly released by the pineal gland. It is responsible for synchronizing the circadian rhythms of the body that includes controlling your sleep-wake cycles.

It tells the body when to sleep and when to wake up. When it gets darker, the body’s melatonin levels start to rise which causes you to feel sleepy. On the other hand, the amount of melatonin produced by the body drops as it gets lighter, making you awake.

Melatonin can be made synthetically, often sold as a supplement to help make you sleep. It can help alleviate insomnia, delayed sleep phase syndrome, rapid eye movement sleep behavior disorder, and other sleep problems. 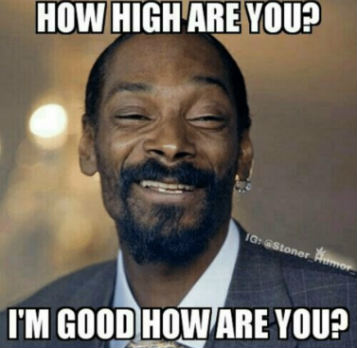 Marijuana, commonly referred to as weed, is a form of cannabis drug that is derived from the leaves, flowers, stems, and seeds of the cannabis plant and used for medical or recreational purposes. It has a wide range of therapeutic effects and can be used as a treatment for many diseases and conditions.

For ages, weed is used to induce sleep for it has sedative effects. It is known for its relaxing effect and is discovered to shorten sleep onset latency.

THC is the main sedative compound found in marijuana. Unless you have trouble sleeping due to pain, Cannabis Sativa would be a better option.

THC or Delta-9-tetrahydrocannabinol is the primary psychoactive cannabinoid or compound found in marijuana that makes you experience a sensation of euphoria and relaxation.

It is a mind-altering chemical that stimulates the brain cells to release dopamine which is the feel-good hormone, giving you feelings of pleasure and bliss, making you feel high.

Aside from that, THC can also induce sleep due to its highly sedative effect. It is known for reducing the amount of time it takes to fall asleep and making you feel drowsy.

It reduces the amount of time in REM sleep or the part where the brain is most active which in turn, increases the deep NREM sleep or the most restorative stage of sleep. But it’s also important to note that CBD can counteract the effects of THC whether it’s the sedative effect or the high.

There are dozens of compounds in marijuana that can help make you sleep, the combination of these compounds make marijuana highly effective for sleep in general.

However, the effects of marijuana may widely vary depending on the manufacturer and the amount of these components in the strain.
Here are the main components in marijuana that aid sleep and how these can help you sleep:

It is available over the counter in most parts of the world. However, in some countries, it requires a prescription.

The use or possession of marijuana whether for medical or recreational purpose is prohibited in most parts of the world. However, there are countries and US states and districts that permit the use of marijuana for medical purposes.

US States and Districts

Note, a doctor’s approval is required to use marijuana medically. In most places, you need to fill out an application and pay a fee before you can use it as a treatment.

The laws regarding marijuana vary from one place to another, so it’s important to know what are the restrictions, specifications, and requirements in your area before you even think of choosing it as a sleep aid.

Safety, Side Effects, and Dependency

In general, melatonin seems to be safe when taken orally for both short-term and long-term (up to 2 yrs) use.

Under the supervision of a doctor, it can be safely injected directly into the bloodstream. It is also safe when applied on the skin short-term. However, it can be unsafe to pregnant and lactating women, so it’s best to avoid it in this case.
Aside from that, melatonin can interact with the following medications:

Though melatonin is generally safe, and you are not possibly going to develop side effects from taking it, here are some of its common side effects when taken in excess and in an extended period:

Some of the more uncommon side effects of melatonin are:

You are unlikely to have diminished response after taking it repeatedly and become tolerant of it, so it is non-habit-forming. You are also not likely going to get addicted to it or even dependent upon it and are unlikely to get withdrawal symptoms.

For short-term use, it is safe when taken by mouth appropriately according to prescription and when used as a standardized mouth spray. However, as a plant or plant extract, it can be unsafe when smoked or taken orally. It is also dangerous for pregnant and lactating women.

Marijuana can interact with various medications with different severities. Here’s a list of these medications according to interaction severity rating:

Major
It means that when taken with the following, serious adverse effects could occur.

Moderate
An adverse outcome could occur when these are taken with marijuana.

Minor
It is possible that an adverse effect could occur if you take this with marijuana.

These are the possible side effects due to marijuana:

In addition to that, you are also highly likely to develop drug tolerance, addiction, and dependency on prolonged marijuana use.

It is often taken orally and sold over the counter as tablets, lozenges, and gummies. It is also available as tinctures, lotions, and other preparations.

There are a couple of ways to use marijuana medically. It is usually smoked in hand-rolled cigarettes (joints), in pipes, in water pipes (bong) or in rolled cigar wraps. The use of vaporizers to consume weed is also an option.

It is sometimes added to food such as cookies, brownies, or candies. Some people even brew it as a tea. But edibles, food or drink infused with marijuana, should be taken with more caution due to its higher potency and its tendency to lead to overdose.

Studies show that marijuana can increase the levels of natural melatonin in the body. Not to mention that the combination of marijuana’s soothing, sedative effects, and melatonin’s ability to regulate the sleep cycle work well together.

So when taken together, the effectivity of both marijuana and melatonin to induce sleep is boosted.

One problem encounter by weed users is the lack of dreams due to THC’s effect that reduces REM sleep, the stage where we dream the most and increases deep NREM sleep.

But dreaming and REM sleep is essential for the body, for these help in exercising the brain, retaining memories, and keeping the immune system healthy. Taking melatonin alongside marijuana produces more vivid dreams which can counter the said problem caused by THC.

Taking them together makes them more effective but is it safe? Generally, taking marijuana and melatonin together is safe, unless you consume too much.

However, it’s the opposite when the body’s base melatonin level is already high, THC can inhibit the melatonin peak in this case. With that being said, the effects of THC with melatonin’s effectiveness may vary depending on the situation.

This is why when using melatonin and marijuana together, the Cannabis Indica is more advisable since it has lower THC.

Finding it hard to adjust your bedtime for work or for school? Jet lag?

Then, I would suggest you go get Nature Made Melatonin 3mg Tablets to help you with that due to its quality, purity, and effectiveness.

It is even said to be the best melatonin product in the market.

This high-quality, USP-certified melatonin supplement also has no gluten, no yeast, no preservatives, and no artificial flavors.

See the price and read reviews

Anxiety, stress, and pain can make it difficult to sleep and may keep us up all night.

If that’s the case for you, the highly recommended and effective BETTERGENICS Natural Hemp Oil would be a great help to make you sleep peacefully and comfortably.

Aside from being an effective sleep aid, it has a tasty, fresh tropical flavor, unlike most hemp oils that have a plant-like taste.

The Benefits and Drawbacks of Melatonin and Weed 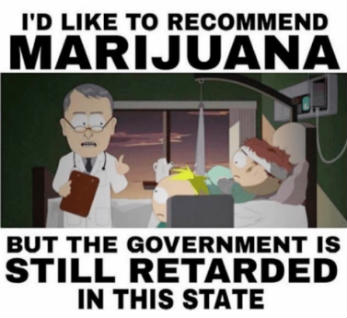 Can I take CBD oil with melatonin?

Yes, you can. There are even supplements available which have both CBD oil and melatonin as an ingredient. These two can work together to help you have a better sleep.

CBD or cannabidiol is non-psychoactive cannabinoid known for its ability to promote relaxation and to reduce anxiety while melatonin is a natural chemical that regulates the sleep-wake cycles.

Can you smoke melatonin?

Not really. There aren’t many studies regarding smoking melatonin and its possible effects. So, for your safety, it is better to take melatonin orally in the pill form or other preparations available over the counter.

Can melatonin get you high?

No, it is unlikely to get you high. Melatonin is a hormone naturally produced by the pineal gland to manage the body’s circadian rhythm.

What it mainly does is it signals the body when to sleep and when to wake up. It is also discovered to be an antioxidant and is known to have an anti-inflammatory effect. But it has never been proved to make you high. 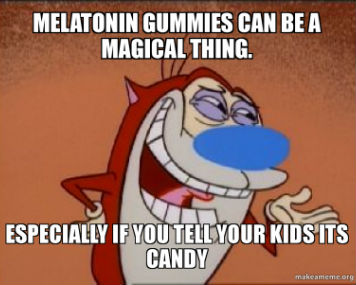 At the end of the day, it all depends on your preference and your condition. Marijuana with high THC and/or high CBN might be your choice if you are looking for an effective sedative.

If you are having trouble sleeping due to pain, stress, or anxiety, you would want a marijuana product with high CBD levels.

However, if you need a supplement to help regulate your sleeping pattern, take a melatonin supplement instead.