Melatonin and diphenhydramine are two of the most popular sleep aids which people use when they find it hard to sleep or stay asleep. Though both are used for insomnia, are they both just as effective? How are they different?

Diphenhydramine, or Benadryl, is more effective for a bad case of insomnia since it is a sedative. But since it is unnatural, you might experience some side effects and it isn’t advisable for long-term use. On the contrary, melatonin is safer to use but it isn’t quite as effective as diphenhydramine. It will make you sleepy, but you need other sleeping guidelines too to help you sleep.

You’ll want to check out the highly popular Nature Made 3mg Melatonin Tablets if you think that melatonin is the right sleep aid for you. You can sleep at night knowing that you are in good hands since it doesn’t contain any artificial flavoring and coloring, preservatives and yeast. Conversely, if you want something stronger, the Benadryl Ultratabs Allergy Relief is a great option.  It is non-habit forming and very affordable. 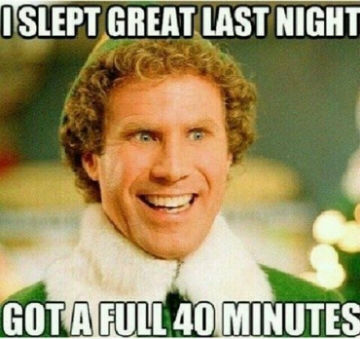 What Is Melatonin and What Is It Used for? 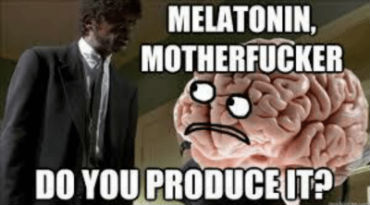 Melatonin is a hormone that is produced by the pineal gland. Its most important function is to control our circadian rhythm, or our body clock, which tells our body when to sleep and when to wake.

Our melatonin levels can be influenced by foods like tomatoes, walnuts, cow’s milk, rice, olives, and strawberries. However, there are also melatonin supplements which you can take as a sleep aid 30 to 60 minutes before you sleep. They are available in pill, lozenge, chewable and liquid forms.

It is used by people who find it difficult to fall and stay asleep. Aside from insomnia, it is also used for sleep disorders like sleep phase disorder and sleep work disorder. People who are experiencing jet lag sometimes take it too.

What Is Diphenhydramine (Benadryl) and What Is It Used for? 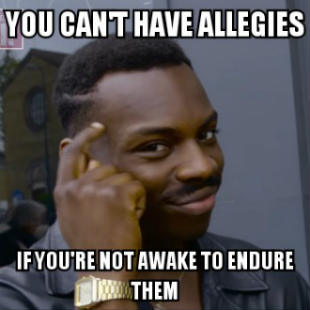 Diphenhydramine is an antihistamine that is used to treat allergy symptoms like sneezing, watery eyes, skin rash, runny nose, hives, and itching.

But it is also used for insomnia due to one of its side effects which is sleepiness. Some use it for movement disorders, nausea and motion sickness as well.

This medicine can be taken by mouth or directly injected into a vein or a muscle. After taking a dose, you can expect to feel the effects of this antihistamine for 2-7 hours.

Are Diphenhydramine and Benadryl the same thing?

Benadryl is a brand name for the antihistamine diphenhydramine. However, it goes by other brand names as well like Aler-Dryl, Allermax, Diphen, Siladryl, Sominex, and Unisom.

What Are the Differences Between Melatonin and Diphenhydramine?

Since diphenhydramine is a chemical solution that is not naturally occurring in our body, its usage might lead to more side effects than melatonin. 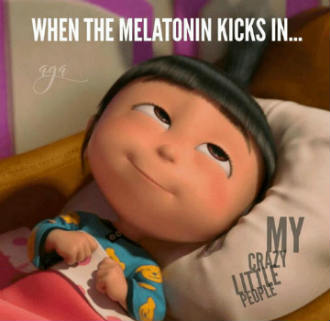 What melatonin does is nudge you to sleep. It makes you feel relaxed and sleepy. But it is quite easy to counter its effects if there are stimulants like games, TV and blue lights that are keeping you awake.

When using melatonin, you’ll need to follow sleeping guidelines to take advantage of its effects. 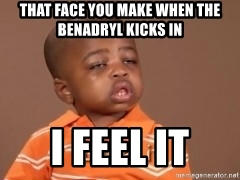 In fact, its effect is so strong that you should not be driving or operating machinery after taking diphenhydramine or Benadryl.

Side Effects and Safety

Melatonin is safe for short-term use with little side effects. There are also some who have used it for up to three years without any adverse side effects.

Compared to other sleep aids, it is highly unlikely that melatonin would cause you to become dependent nor give you reduced effects after continuous use.

Melatonin side effects, though rare, can include the following:

If you’re considering using melatonin, it is a good idea to check with your doctor first especially if you’re taking medications such as anticoagulants, anticonvulsants, contraceptives, immunosuppressants, and diabetes medication.

It isn’t advisable to use melatonin when you’re trying to conceive, pregnant or breastfeeding as well.

Diphenhydramine is deemed relatively safe for short-term use as well. However, compared to melatonin, there’s a higher chance that you’ll develop side effects like the following.

Some people develop an allergic reaction to diphenhydramine. It is also not recommended for breastfeeding moms, kids, and elderly people.

Due to its many possible side effects, it’s best if you consult with your doctor first before you take diphenhydramine even if it’s available over-the-counter.

Melatonin is available over-the-counter in Canada and in the US where it is sold as a dietary supplement. It is affordable with each bottle ranging from $7 to $40 depending on the form, brand, strength, and number of pills. 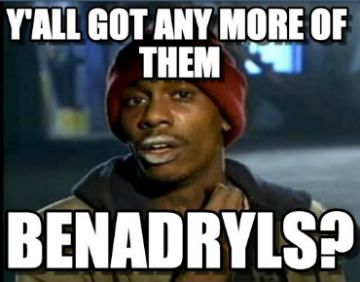 Diphenhydramine is available both over-the-counter and by prescription. Each bottle can cost you $5 to $30 depending on the strength, brand, and number of pills.

If you’re looking for the best melatonin products in the market, then the Nature Made 3mg Melatonin Tablets won’t disappoint you.

Available in both 120 and 240 tablets per bottle, this highly rated melatonin sleep aid is just what you need to regulate your sleep-wake cycle.

You can take this without any worries since it is free from artificial flavoring and coloring, preservatives and yeast. Plus, it’s verified by the USP for its quality and purity.

Just check with your doctor if you’re pregnant, nursing, or have any existing conditions before you start taking this melatonin product.

Once you get the green light, just take a tablet an hour before you sleep, and you’ll be able to get a refreshing slumber.

Click here to check the price and read real reviews

A good night’s sleep is just a couple of tablets away with the Benadryl Ultratabs Allergy Relief.

It is an allergy medication but the diphenhydramine it contains is just what you need to fall and stay asleep.

Each box contains 48 tablets with 25mg of diphenhydramine HCl each.

This means that you can take up to two tablets during bedtime and this should be enough to make sure that you have a solid night of sleep.

It also works quickly so you can sleep in less than an hour after taking it. Not to mention that it is non-habit forming so it’s safe to use.

Click here to check the price and read real reviews 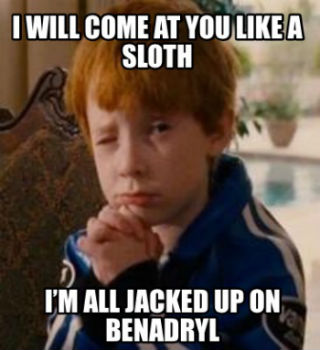 Pros and Cons of Melatonin and Diphenhydramine 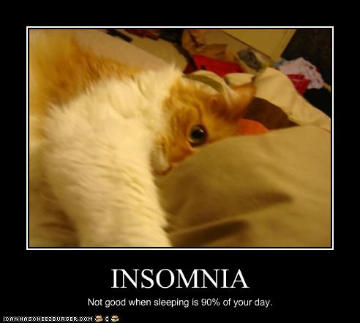 Melatonin vs Diphenhydramine (Benadryl): So, What’s More Effective for Insomnia?

Being that melatonin and diphenhydramine are two of the most popular sleep aids, it can’t be helped that they’re compared a lot. But they’re quite different and the right one for you depends on what you need.

If you’re looking for something more natural, melatonin is your go-to sleep aid. While it is the safer option, take note that it isn’t quite as effective for insomnia as diphenhydramine.

This is because instead of making you fall asleep, it makes you feel relaxed and sleepy to help regulate your circadian rhythm. In contrast, diphenhydramine (Benadryl) will make you fall asleep but you’re at a higher risk of developing side effects.

Also, before trying any of these sleep aids, it’s a good idea to check with your doctor first especially if you have existing medical conditions.

Melatonin and diphenhydramine can interact with medication that you might be taking or make your symptoms worse.

Once you get the go signal, the Nature Made 3mg Melatonin Tablets is a must-try since it is safe to use and verified to be a quality item.

Or, if a diphenhydramine product is your sleep aid of choice, give the Benadryl Ultratabs Allergy Relief a shot. It’s made for allergy relief but it is also a strong and fast-working sedative that is very effective when it comes to insomnia.